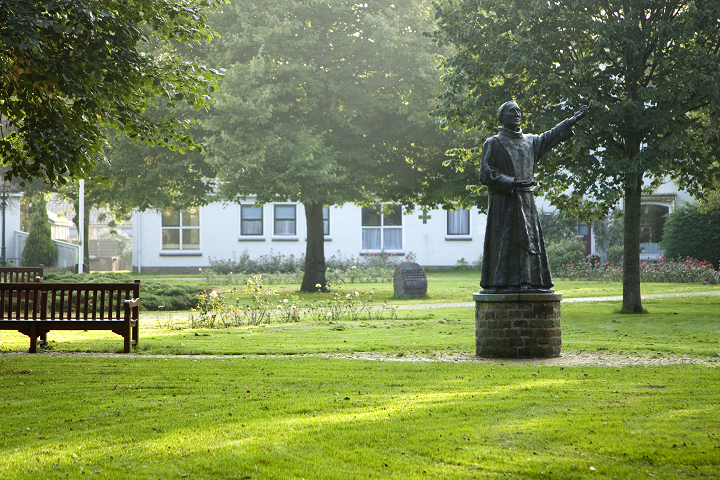 It is believed that the monks from the Cistercian cloister Claercamp, based on the main land in a little place called Rinsumageest near Dokkum, Friesland, were the first inhabitants of Schiermonnikoog. The monks who worked the land wore grey cowls (loose hooded robe). This is how the island’s name was formed. Schier means grey, monnik means monk and oog means eye as well as meaning the same as ei in the word eiland, meaning island.

In memory of the monks, a statue was created in 1961, by artist Martin van Waning, and placed in the centre of the village.

Until 1859, the island was owned by various descendants from the Stachouwer family, who were later also known as Van Starkenborgh-Stachouwer. This family formed the foundations and the characteristics of the village, as we still know it. Parts of the street lay-out they created for the island haven’t changed and are part of its heritage.

During the 17th Century, the island developed from having a couple of small villages to just one village “Schiermonnikoog”. This was decided by the Stachouwer family, who owned the island at this time.

In 1859, Schiermonnikoog was owned by Mr John E. Banck. He personally funded the building of a grassy sea wall and the creation of the Banckspolder, to protect the village from the sea. At Mr Banck’s favourite viewing point on the sea wall, a stone bench was built, looking out over the beautiful views of the Wadden sea. This bench is still known by islanders as “Bank van Banck”, which translated means Banck’s Bench.

In 1878, the island was sold to a German Earl, Hartwig Arthur von Bernstorff. This Earl created a coniferous pine tree forest on the island to encouage the trade in wood. To support and encourage trading he also funded the building of the first harbour, which is now known as the tidal marina. Earl Hartwig Arthur von Bernstorff died in 1940 and his son Bechtold Eugen, Earl of Bernstorff, inherited the island briefly until the start of the second world war.After the war the island was handed back to the Dutch state.