Schiermonnikoog has two lighthouses, a white one and a red one. Only the red lighthouse (the Noordertoren/ North-tower) is still in use and is manned 24 hours a day. 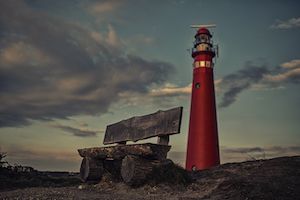 King Willem III ordered that the two lighthouses were placed on the island and a year later they added a static lighting device. These towers acted as beacons for the shipping traffic. When the two lights coincided, ship Captains would know that they could sail between the sandbanks of the North sea and the Wadden sea.

At the beginning of the 20th Century, the red lighthouse was fitted with a mechanical turning light. This made the white lighthouse redundant. Following this, the white tower was used for many years as a water tower. Nowadays it is only used an antenna mast.

Information about the Red Lighthouse: